The Nigeria Shoprite knew when they made entry through the launch of The Palms in December 2005 is a sharp contrast to its current condition. Little formal retail competition, a stable currency and much higher GDP growth rates were core themes in Nigeria’s story about a decade ago and as a result, Shoprite’s business grew by over 10% annually for 13 straight years in its Non-South African country operations where Nigeria played a major role.

Shoprite sat at the very heart of Nigeria’s retail boom which saw the total retail space grow 10x from 2005 to late 2017. Despite the 13 years of strong growth, the combination of events that have occurred over the past 3-4 years was enough for Shoprite to decide, albeit in a much softer way than their South African counterparts, to call it quits by selling a stake in their Nigerian subsidiary to potential investors. All in all, the signalling that comes with a complete or partial sale of Shoprite’s stake in its Nigerian subsidiary is much worse than the action itself.

Why are they leaving?

Nigeria’s retail market faced a myriad of challenges following the recession in 2016 provoking a loss of confidence in the market as investors suspended their large exciting retail projects and a handful of retailers exited the country. With a slowdown in retail developments, Shoprite, who serve as the go-to anchor tenant in Nigeria’s major malls found it difficult to expand.

Segmental sales growth in Nigeria since June 2019 have been unimpressive compared to Shoprite’s home market in South Africa, even though that economy has been in recession since the beginning of the year. The xenophobic inspired attacks in September 2019 saw 14 Nigerian malls with Shoprite as its anchor tenant looted and damaged. This worsened sales growth and led to a 59% reduction in weekly customer visits according to their 2019 results presentation. Two months after the protests, customer visits were still 14% lower than the typical. 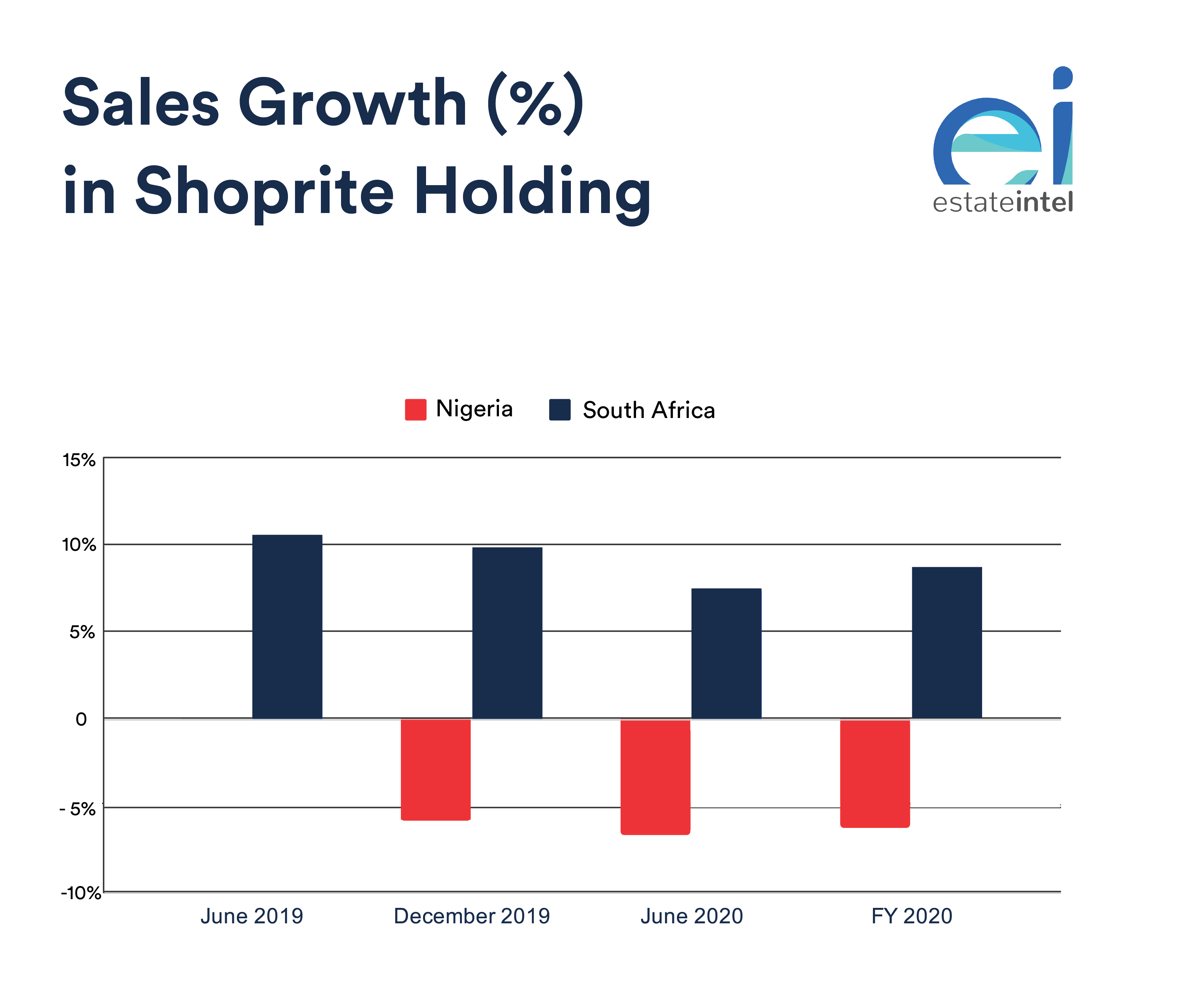 Although Shoprite’s recent performance decline is highly influenced by currency fluctuations, the group mentioned in their 2019 results presentation that they were taking immediate actions in reducing dollar-denominated rent, borrowings and curbing capital allocation for new stores and developments proving these were also a struggle for the company.

How big is Shoprite in Nigeria? 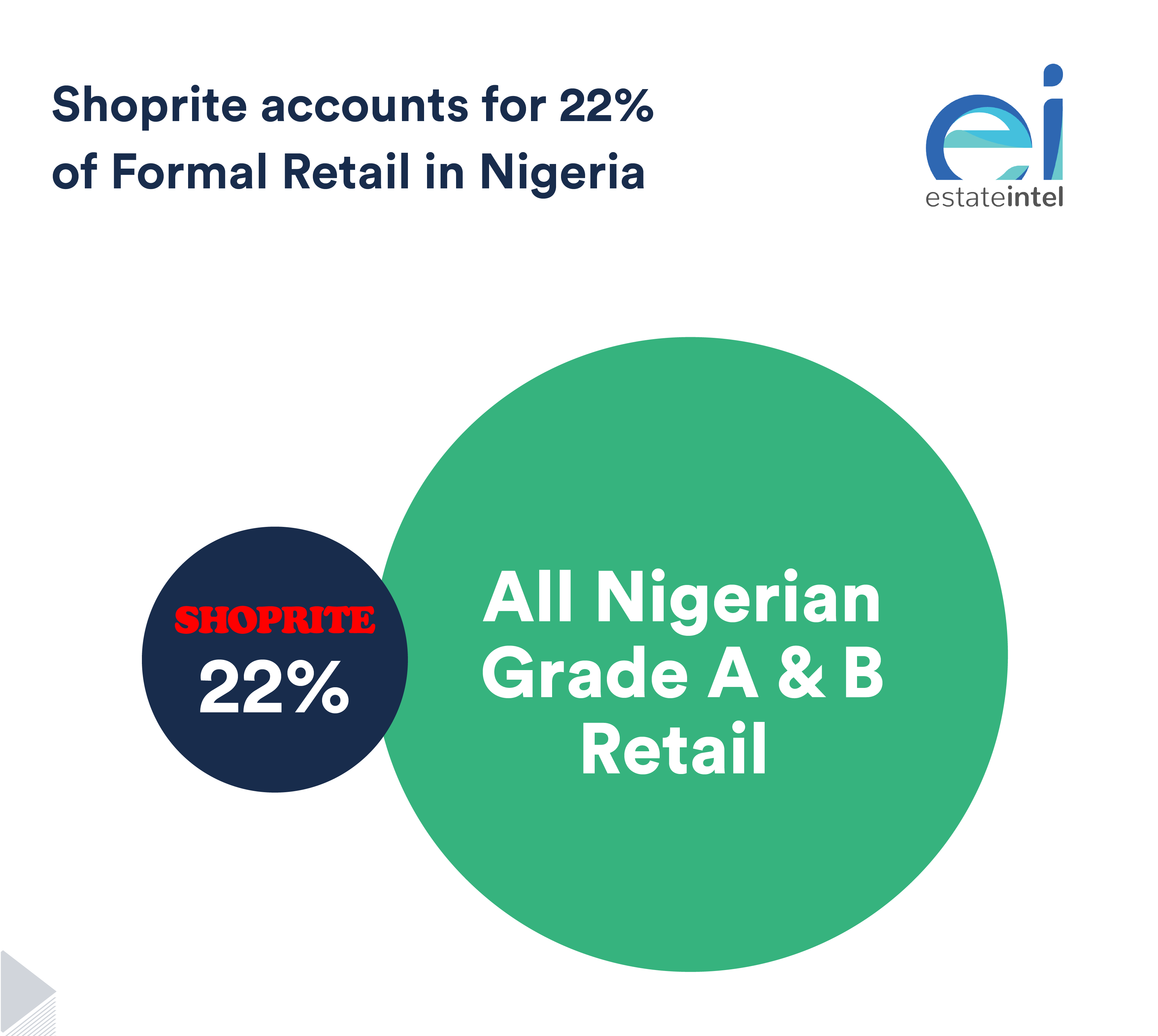 Who are the potential investors in Shoprite that can close the void?

Retail Supermarkets Nigeria Limited, the Nigerian arm of Shoprite Holdings revealed they have identified Nigerian investors that “share in its vision”.  Shoprite Holdings is keen on creating a “truly Nigerian business” for its Nigerian arm by transferring the majority of its ownership to indigenous investors. This provides an opportunity for indigenous retailers who started out in standalone shops seeking to expand their local dominance by growing into malls.

A few notable Indigenous retailers who have recorded significant growth recently include Hubmart, Jara, Prince Ebaeno among others. While some retailers have expressed interest and started to expand their footprint into formal retail centres, others have expressed disinterest in that strategy.

Hubmart expanded into formal retail centres through their entry into The Lennox Mall in 2018 leading to a total of 4 retail stores in Lagos State. Prince Ebaeno has so far avoided the formal retail strategy and stuck with standalone stores. Now they control a total of 5 retail stores in Lagos and Abuja. Jara (officially EDLP Nigeria Ltd) recently launched a small retail centre in Ikeja and another in Edo State and are looking to establish a nationwide discount supermarket and retail chain and aligning with Shoprite could expedite that process. The company is linked to the Persianas Group (owners of The Palms chain of malls) who, as we will point out, have a vested interest in this process. Other retailers such as SPAR, keen on expanding their local presence in formal retail may also be looking in Shoprite’s direction.

It is worthy to note Carrefour, an International retail store with relatable dominance across other African countries who tried penetrating the market by anchoring the c.20,000 sqm Twin Lakes Mall by Actis. Further expansion by Carrefour after Twin Lakes Mall would have threatened Shoprite’s dominance. However, plans for this mall were suspended largely due to the macroeconomic downturn, retail market fundamentals and a change in Actis’ investment strategy. The sale of Shoprite might just serve as an opportunity for Carrefour to make market entry if they are willing to look long term as problems that suspended Twin Lakes Mall still persist.

What does this mean for the market players?

1. Shoprite – The mighty anchor: As we expect the Nigerian arm of Shoprite to continue to build the business in Nigeria with potential investors, a transfer of ownership to indigenous investors with better staying power should reduce the risk of foreign exchange volatility as they patronize indigenous products and report profit in naira. Shoprite can then focus on its South African arm without the distraction of volatile commodity-based economies like Nigeria which make it hard to operate.

2. Other Retailers: In our Boom & Bust report, we pointed out that retailers typically start out in standalone shops, expand their footprint and gain the capacity to grow into malls. In Nigeria, the malls came much faster than the tenants could grow as strong homegrown brands are only just coming into their own. This potential sale provides an opportunity for an existing retailer to bolster its operations, not just by moving from standalone stores to formal centres but dominating the market as an indigenous retailer (This is in a case where Shoprite’s brand name is not retained).

Observing international retailers that have or are in the process of exiting Nigeria such as Woolworths, Truworths, Mr Price, they tend to stick with operations in their country of origin as they understand the market and have historically generated impressive returns. An indigenous retailer acquiring Shoprite’s property portfolio will be immense for organic growth and will likely see the retailer support the development of multiple shopping malls in the future.

3. Asset Owners: Shoprite’s announcement most likely causes a major scare to mall owners due to the amount of retail space controlled and the proportionate control of income. Many asset owners found out about their plans at the same time as everyone else. Novare, Resilient Africa and Persianas Investments who control 40% of Nigeria’s formal retail and own 10 of the 25 malls that Shoprite are in, have a lot to lose if this process does not run smoothly. We expect them to be involved in this transition that will change who their largest tenant will be.

Where have we seen this before?

It is time for Indigenous retailers to dominate

Shares in Shoprite Holdings increased by over 11% on the 3rd of August, 2020 showing that investors are more confident with the decision. Nigeria’s macroeconomic realities do not seem favourable particularly for international retailers due to the foreign exchange volatility. However, local retailers such as Prince Ebaeno, Hubmart and Jara have better-staying power and are even expanding stores due to the lower exposure to foreign exchange volatility that international retailers have cited as a crucial problem.

These chain of events could establish dominance for indigenous retailers as seen in the Kenyan retail industry with the current largest retail stock in Sub-Saharan Africa. Their first formal mall opened in 1984 and their indigenous tenant pool has grown organically over time. Indigenous retailers undoubtedly need to be supported but the current immense opportunities could tell a new story for the sector 5-10 years from now.

How to build the ideal pan-African Real Estate Service business