Arguably the most upmarket region in Lagos, Ikoyi is known for high flying property prices in the residential and office sector. Unluckily, the tough economic and business landscape that Nigeria has faced over the past 18 months, put together with a changing supply dynamic has put pressure on those high prices.

Aside these economic woes, the Ikoyi narrative had already started changing and Alfred Rewane Road sat at the heart of this. New mixed use developments with the larger component usually being office, have lined up on this road as investors push to cement their trophy assets; and 2015 was a major year for their completions. Buildings such as Heritage Place, Temple Tower and B.A.T Rising Sun collectively put up close to 32,000m² on the leasing market. Others like Alliance Place and Kingsway Tower which are still under construction also began to visibly emerge. It has put significant pressure on rents.

Troloppe Property Services explains that between Q4 2014 and Q4 2015 the supply of premium Grade A/B office space in Ikoyi increased by 170%, leading to an initial decline in rates spurred on by developers competing for tenants. They also expect rates to drop further in 2016 until positive occupancy levels are reached.

With increased supply and tougher economic conditions, Lagos based real estate advisers have noted that the office market in Lagos is now a tenants market.

In other sectors, domestic investors and business owners are feeling the pressure, especially from a FOREX and liquidity standpoint. Internationally, investors are loosing confidence, as notes from the Nigerian Bureau of Statistics showed that capital importation more than halved from $20.7bn in 2014 to a whopping $9.6bn in 2015. 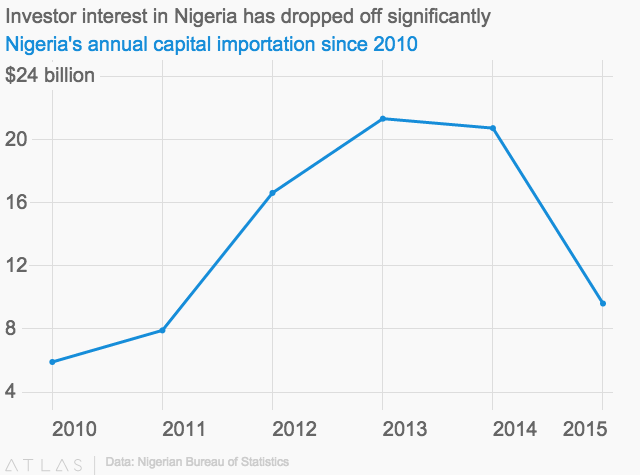 Since the initial descent of oil in Mid 2014, Nigeria has struggled to cope and this is beginning to show across board.

Workstation is now benchmarking pricing of their coworking spaces to the Dollar, here’s why